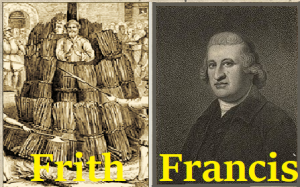 Two Monday lunch time lectures have been arranged on Zoom for February and March.
The first is on February 14 when Norman Hopkins will speak on John Frith 1503-1533.
In his short but brilliant and insightful life Frith was the first reformer to write in English against the Roman Catholic Mass and Purgatory. He was arguably the closest friend of William Tyndale. His writings were also later raised from the depths of the English Channel to be republished as the Book-Fish.
The second is on March 14 when Gary Brady will speak on Benjamin Francis 1734-1799. This Welsh born Baptist minister studied for the ministry in Bristol and after
a short pastorate elsewhere went to Horsley (later called Shortwood), Gloucestershire. There he remained ministering for the next 42 years. He was the author of many hymns and poems.

The lectures will be at 1-2 pm. Details of how to connect can be obtained from the Library.