Om Monday June 7 2021 about sixty joined us on zoom for the Annual Lecture of the Evangelical Library. This is the second time we have had the annual lecture in this format and although there are 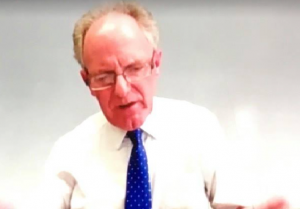 This year is the five hundredth anniversary of Luther’s famous appearance before the Emperor Charles V at the Diet of Worms. We were taken very ably through the events that led up to and followed the Diet by David McKay, Professor of Systematic Theology, etc at the Reformed Theological College in Belfast and pastor of Shaftesbury Square Reformed Presbyterian church in the city.

1. The Road to Worms – the debates at Augsburg and Leipzig and Luther’s writings in that period.
2. The Confrontation at Worms – burning the papal bull, heeding the summons, answering the charges,  affirming the truth of the authority of Scripture alone
3. The Aftermath – the Wartburg, further fruitful work and subsequent controversy
There was a brief time for questions then our time came to an end. A very good evening.
A recording can be had from the Library adn in due time the text will appear in the next edition of In Writing
Categories: Events, NewsBy Gary Brady8th June 2021